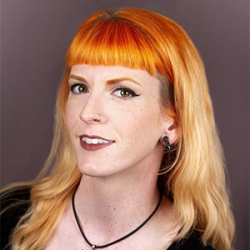 Crista Llewellyn graduated from San Francisco State University in 2012, since then she has gone on to study at the Blush School of Makeup in San Francisco. After attending Blush, she moved to Los Angeles and interned at several special effects makeup labs including Makeup Effects Labratories and Creature Effects. She has worked the past two years at Six Flag's Fright Fest, working closely with the Scream Team. Crista splits her time between working in the lab and on set for independent films, web series, and specialty events. She's currently working at Joel Harlow's lab, and some of her more notable projects include Oscar's Hotel for Fantastic Creatures, Fight of the Living Dead, All Through the House, The Head Collector and The Goblin Queen.