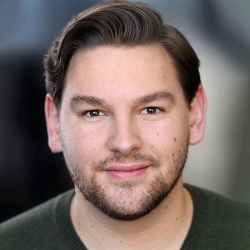 Drew Reitz (2014) has been very active in the bay area theater scene since his graduation. He was recently seen in the SFBATCC award winning In Love & Warcraft with Custom Made Theatre Co. and has worked with SF Playhouse, Palo Alto Players, Dragon Productions, and The Pear Theatre. Last year the Silicon Valley Small Theatre Awards named him an "Actor To Watch Out For Next Season". Drew has also been involved with commercials in San Francisco, working on projects for YouTube, Salesforce, and Google. In the next few months he will be making his way down to Los Angeles to pursue film and television opportunities. You see him up next as Rapunzel's Prince in Into The Woods in Palo Alto.