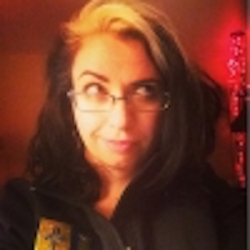 Jacqueline Steager (M.F.A. lighting 2010) is the assistant production manager, master electrician and house lighting designer at the JCCSF. Jax is a company member of Berkeley-based Impact Theatre, which you may have heard is giving up its space but is not finished yet by golly. She's lighting director of the Bracebridge Dinner at Yosemite, running the historical holiday show at the Ahwahnee Hotel, which so far Jax has managed to avoid calling "The Majestic". The Edinburgh Fringe venue company she co-founded, Gryphon Venues, is on hiatus but plans to return. She continues to serve in the Air National Guard. When she's not in dark rooms pushing buttons or launching fighter jets, Jax can generally be found far out in the backcountry, climbing rocks.