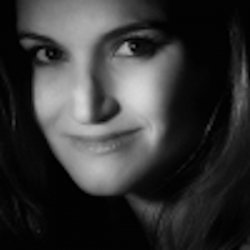 Kamala Devam (2001) is a multi-lingual dance artist, choreographing, performing and teaching in the UK and US. Kamala grew up training in Bharata Natyam for thirteen years in the Bay Area with Kalakshetra graduates Katherine and K.P. Kunhiraman and received her B.A. in contemporary dance at San Francisco State University in 2001. She has performed Bharata Natyam professionally in Malaysia, India and England and toured the US and Mexico with SF-based California Contemporary Dancers. Since moving to London in 2004, Kamala has performed for the London 2012 Olympic Opening Ceremony with Akram Khan Company, toured internationally for 8 years with Shobana Jeyasingh Dance and worked with many independent choreographers including Merav Israel, Luca Silvestrini (Protein Dance) and Stephanie Schober . She has collaborated with choreographer/dancer Seeta Patel on their multi-award-winning dance film The Art of Defining Me (2013) and toured their duet works (Alter Ego, 2007 and Last One Standing, 2009) and her own solo (FretLess, 2010) internationally. Kamala is a Visiting Lecturer at the University of East London and an internationally commissioned choreographer for university and youth dance companies, returning to SF State to premiere "The Shedding" on the University Dance Theater in Spring, 2015. Kamala founded Kamala Devam Company in January 2016 after successful London commissions for dance research with SF-based dancers. KDC premiered its debut piece "Ankusha" at the London Southbank Centre in Sept 2015, created with support from Arts Council England, Akademi, The Place and University of East London. Kamala hopes to bring her company work to San Francisco in the near future.