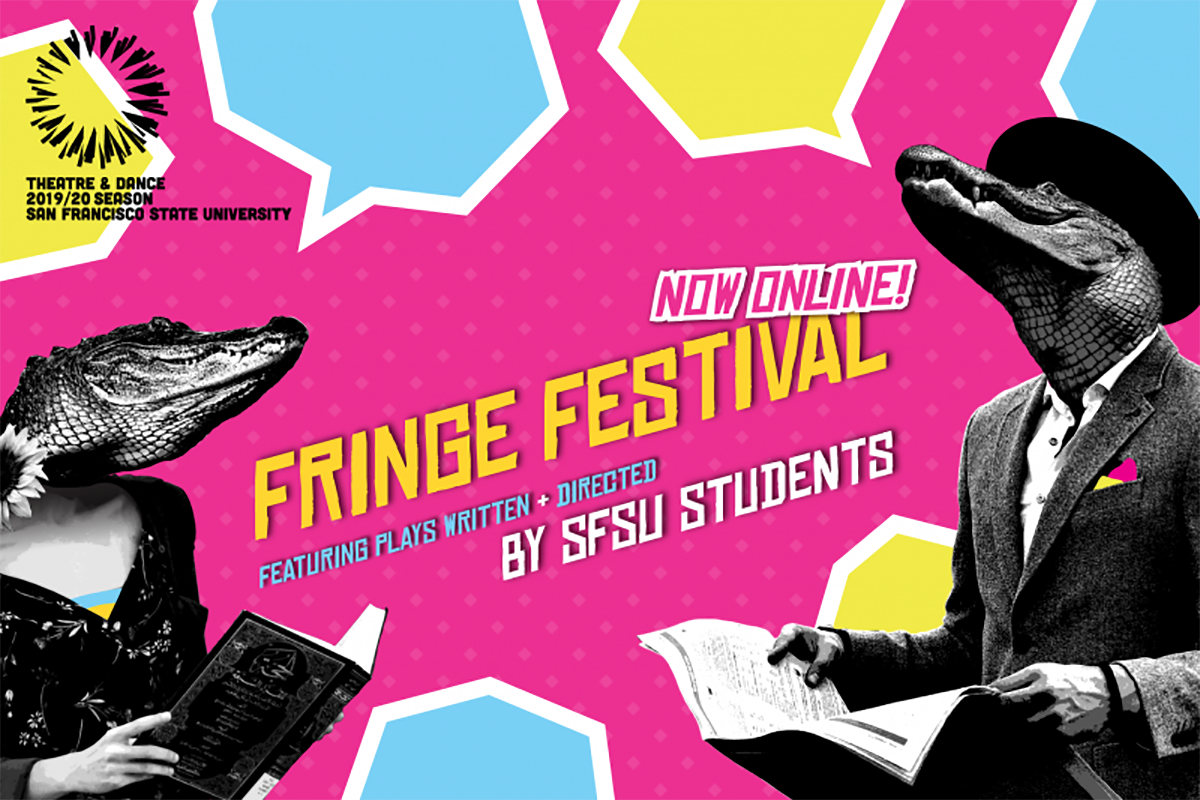 The Fringe, which in various forms has been around for more than 25 years, exists to produce plays being written by the dynamic community of San Francisco State University's student playwrights. Through a project oriented and hands-on experience it aims to educate students in the phase of playwriting which takes a play on the journey from the page to the stage — or in this year’s version to video recordings via Zoom. Working in production teams, with student playwrights, directors, dramaturgs, actors and managers under faculty supervision the Fringe exposes all students involved to the nature of the theatrical experience when the writer is actually part of the process. For the writers themselves it is an opportunity to learn to revise, polish and finish a piece in the heat of rehearsal and performance.

Throughout its existence, the Fringe has been an opportunity for the diverse and multi-cultural voices of San Francisco State students. It has produced many plays by Asian-American, Latinx and African-American writers, as well as many LGBTQ writers, delving deeply and entertainingly into the many aspects of culture represented in the State Theatre Arts and Creative Writing programs. Among the writers whose work it produced while they were studying playwrighting at State are a number who are nationally and regionally prominent, including Marcus Gardley, Peter Nachtrieb, Claire Rice, Chris Chen, Evelyn Pine, Terry Boero, Conrad Panganiban, Rachel Bublitz, Ai Ebashi, Nicole Jost and many more.

Three friends learn the person responsible for organizing the bombing that killed their friend is set to be released in a prisoner exchange.

A Note about Marla

"Marla" is based on the circumstances surrounding the death of Marla Bennett, a twenty-four-year-old graduate student who died in the Hebrew University bombing on July 31, 2002. Marla, who grew up in San Diego, California, was a close friend of the playwright, though she was ten years older. In this work, Ali has imagined how her contemporaries would have reacted to this news, and her death — conversations Ali was too young to be included in at the time. Much of this play is real and true, including quotes from a letter Marla sent to her parents before the bombing as well as accounts of the funeral, which Ali attended, and information on her death, pulled from legal documents and articles.

“The Three of Us” by Lilly Rodriguez

An actress converses with other characters, herself and the audience in three scenes. Betrayal, lust, and English and French accents

“PG&E and Me” by Jon Strednak

He’s just a couple of days late on his bill payment. And he was just about to pay. Really.

They say that marriage is the start of a new life, but what if you ditched your wedding, better yet what if your fiancé also bailed too? Wouldn't that be something?

The Amazon is on fire, and a Jaguar urges us to flee, while a native of the rainforest waits to be consumed.

Elves get numbers, but the Santa and Mrs. Claus gave Jean Pierre a name and a warm room in their home. So why would he leave? And now why would he return?

As a physical altercation breaks out between a group of friends, each of them gives us a wildly different perspective on violence, their relationships to one another, and themselves.

Partners in crime are driven to prison by partner cops. After all the time they’ve spent together you’d think they’d know each other.

Three students stay after school to supervise their male classmates who are supposed to be serving a detention sentence. As the boys undermine their authority and berate them with insults, a fire is lit within the girls to take this mistreatment no longer. A political drama inspired by the Kavanaugh hearings and the #MeToo movement.

“How Many More” by Samantha Sotomayor

In three monologues, a high school student, a college student and a high school principal process different elements of a mass shooting.

“The Tube” by David Skibbens

Inside the mind of a BART train operator descending into the Transbay Tube, haunted by dreams of earthquakes?