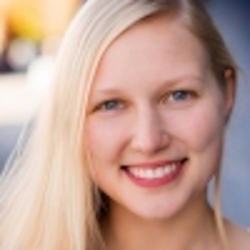 Juliana Lustenader (2013) has been acting, singing and writing for stage and film throughout the Bay Area. She has worked with a plethora of local theatre companies, including Shotgun Players, Custom Made Theatre Co., Broadway By The Bay, CentralWorks, Ray of Light, SF Theatre Pub and NCTC. In 2016, Juliana won a Best Featured Actress in a Musical award from the Bay Area Theatre Critics Circle for her portrayal of Little Edie in Grey Gardens at Custom Made Theatre. She was also nominated by Theatre Bay Area in 2015 for the same performance. While studying at San Francisco State University, Juliana was the recipient of the Clarence Miller Scholarship for Excellence in Musical Theatre, as well as a faculty Book Award for Excellence in Playwriting. She graduated Magna Cum Laude in the class of 2013.