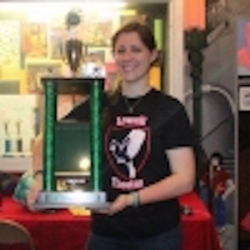 Following graduation, Kyla Morris (2010) segued from Contra Costa Civic Theater where she worked as props designer on four shows with Pied Piper Players to Children’s Theatre as Technical Director as well as substituting for her mentor Associate Professor Kim Schwartz, in the Fall of 2011. She has also worked at Lowell High School as the Technical Director for the theater program. During her tenure, the program has grown from 15 students to a capacity crowd of 60 theater technicians. Supervising all technical elements of the ten, student-facilitated productions, she simultaneously prepared a student team to compete in The Ohlone Theater Festival each year. Kyla and her students have taken home various awards over the years, including the Technical Theater Sweepstakes Award in 2014 and 2016. She attributes the success of this program to the student’s hard work and willingness to take on challenges. She sees her time with students as an opportunity to help them accrue the technical theater skills they can use to find employment during their college years and the team-building work that will serve them far beyond high school.